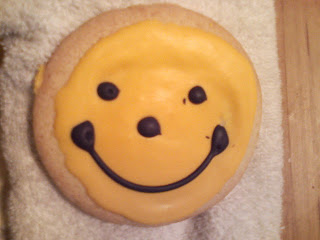 Just over one week to go. Can you believe the Steelers are going back to the big dance, after only three years?

As I have said at least three times, there is no better place to be right now than the Burgh. If you need any more proof, check out the PG's website forum entitled "Coming to Pittsburgh for the Super Bowl."
I am surprised at the number of people traveling from places as far away as California, Seattle, Texas, and even Florida, where the Super Bowl is going to be, just to be with other Pittsburghers for the game. Since I have a five-year old and I am not a fan of crowded bars anymore, I won't be going anywhere for the game; I will stay right here and watch it in the comfort of my home, on my 42" HD, flat-screen TV, glad that I can pause and rewatch any play thanks to the DVR. Part of me would love to go somewhere just to be a part of all the camaraderie; if we win, the city will be crazy.

But that is beauty of being a Steelers fan and part of Steeler Nation; you just know your team is going to go back to the Super Bowl again. Sure, it might take a few years, maybe even a dozen or so. But it will happen.
Our nation has a new president (more on that later). But more importantly, Steeler Nation has a big week ahead. As a local resident of Steeler Nation, I will continue to listen to the various fight songs on the radio and watch the endless news clips about the game, players, etc. And I will wear Steelers gear as much as possible throughout the next eight (hopefully nine or ten) days.

Anonymous said…
I know other cities love their teams, but how can it compare to this? Last Super Bowl, we drove to Oil City to watch the game with my brothers. This time, I think we're staying home -- all the comforts and the ability to put DVE on instead of the network announcers. Here We Go!
January 26, 2009 at 9:18 AM

Anonymous said…
i hope that when you're talking about steeler nation's new president, you're talking about mike tomlin. like the rest of pittsburgh, i've been paying close attention to everything coming out of his mouth in interviews and press conferences, and i could not be more impressed with the dude. i was a big fan before, but in the past few weeks, i've MAJOR fan. i hope coach tomlin is with us for the next 20 years! GO STEELERS!!

Facie said…
Chris: I don't believe anything can compare to this area. I am heading to the Steelers cafe for lunch today (minus the Steelers, of course), but I am sure the vibe will be good. DVE is a good call.

Ash: Yeah, Tomlin rocks. I cannot quite describe him. Some of what he says is funny to me, though it is not meant to be, I am sure. I love all the sayings, quotes, etc.

Popular posts from this blog

January 07, 2021
I have almost no words for what happened yesterday at the Capitol. Protesting is one thing (though I truly think it is and has been time to move on). But to storm the Capitol? A friend on Facebook said, quite simply, " Almost 20 years ago a group of people on an airplane sacrificed themselves to protect the Capitol. How far we have fallen!" Indeed. And, yes, it IS storming the Capitol. I have seen numerous videos of people knocking down barricades/fences, pushing police officers, and breaking windows and climbing through them. That is beyond protesting. And even if a protestor did not do those things, if they followed those seditionists past those barricades and into the building, they are just as guilty. I did not support the violent protests this summer that resulted in damages to businesses and public property (I was in full support of the actual protests). But I also acknowledged as a white person, I cannot truly put myself in the position of a black person who is angry a
Post a Comment
Read more

July 07, 2017
This past Monday afternoon I had my biopsy. Up until Sunday night, I was not worried. In fact, I was never really concerned about having cancer; it was the needle part that bothered me. As it turns out, there is more than a needle; there is an actual incision. So it was not surprising that I only got a few hours of sleep. But on a positive note, I cruised right down the Parkway that morning, being the Monday before the 4th, so there was that. I got there at the prescribed 30 minutes ahead of time; in fact, it was probably close to 35 minutes! I had to wait about 10 minutes, during which I could feel my seat vibrate (still not sure about that; I was tired but I don't think I was imaging it). Then I went back, changed, and waited in the "gowned waiting area" for no more than 5 minutes. Not even enough time to find out whose twins Jennifer Garner was pregnant with! WARNING: What follows will be detailed, though not too graphic. Then I went back to a room, where someone a
3 comments
Read more

February 20, 2018
I have so many disjointed thoughts about guns in America right now. I am sad, sick, and angry about what happened at Marjory Stoneman Douglas High School in Florida last week. I hate that I have to talk to my high schooler about what to do if someone starts shooting in her school. I hate that when the hubs and I dropped her off at the movies last week, I was feeling uneasy as we told her to be aware of her surroundings and pay attention to where the exits are. I hate that my daughter has many unanswerable questions about how what happened actually happened. I hate that my 11-year-old nephew in TX is afraid to go to school because he is afraid of a shooting. I hate that nearly every day since that awful shooting, I have had to read about threats at various schools, instilling more fear in children. Over 5 years ago after the shooting in Newtown, I said that I still consider schools one of the safest places. Despite the fact that we seem to read about more and more school shootings,
Post a Comment
Read more